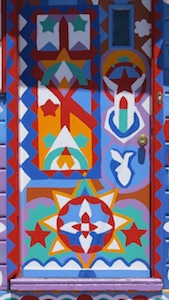 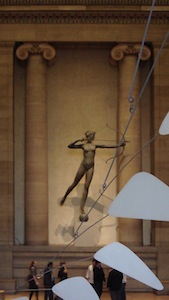 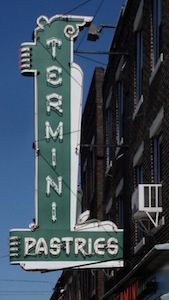 Washington - A department of the Smithsonian's Museum of American Art, The Renwick Gallery is often overlooked in a city of outstanding museums. The Renwick houses a permanent collection of (mostly) 20th Century craft and furniture. Be sure and check out Wendell Castle's amazing Ghost Clock.
Washington - Art critic Robert Hughes once wrote "...(it) may well be the finest work of visionary religious art produced by an American". He was referring to The Throne of the Third Heaven of the Nations' Millennium General Assembly, created in the 1950's and early 60's in the garage of janitor James Hampton. It's now in the permanent collection of the Smithsonian American Art Museum.
Washington - You think ya know the best building in DC? (well...see below...and below that) Tour the Thomas Jefferson Building of the Library of Congress and revise your opinion.
Washington - Even though the building was designed by the great Bertram Goodhue, what you really want to see is way-too-under-known artist Hildreth MeiŹre's Great Hall.
Washington - May have to revise the statement above. The OTHER best building in DC has been renovated and transformed after years of neglect; it was the Old Patent Office, and now it's officially named the Reynolds Center for American Art and Portraiture, housing both the Smithsonian American Art Museum and the National Portrait Gallery. (Got that??)
Washington - OK, there is one other best building in Washington, and it's got 15,500,000 bricks: the National Building Museum.
Washington (Georgetown) - When he wasn't busy being an architectural power broker or builder of cartoons or the Devil incarnate, Philip Johnson could occasionally create something of value. The Pre-Columbian Gallery of the Dumbarton Oaks Research and Study Center is one such example. (The museum gardens, not a PJ creation, are considered among the best in America.)

Cushing - Typically, "monumental sculpture" and "made of wood" aren't found in the same sentence, but visionary artist Bernard Langlais was able to meld the two. In fall 2017, the restored Langlais Sculpture Preserve will become a destination. Various individual painting and sculptures have also been gifted to public institutions throughout Maine on the Langlais Art Trail.
Verona (south of Bucksport) - A bridge with with an observatory! The Penobscot Narrows Bridge.

Boston - Considered one of the country's greatest public monuments, The Memorial to Robert Gould Shaw and the Massachusetts 54th Regiment, by America's premier 19th Century sculptor, Augustus Saint-Gaudens. The excellent 1989 film Glory tells the story of the 54th.
Boston - The Isabella Stewart Gardner Museum
Boston - American Classicism par excellence: McKim, Mead, & White's Boston Public Library. (And try to divert you eyes away from Philip Johnson's horrible addition from the 1970s).
Boston - Also designed by McKim, Mead, & White, Symphony Hall is considered by acoustics experts to be one of the top three concert halls in the world.
Cambridge (Boston) - On permanent exhibit at the MIT Museum, the kinetic sculptures of Arthur Ganson.
Cambridge (Boston) - On permanent exhibit at the Harvard Museum of Natural History, the Glass Flowers of Leopold and Rudolph Blaschka.
Lenox - Frelinghuysen-Morris House and Studio; the modernist home of American abstract artists and art collectors George L.K. Morris and Suzy Frelinghuysen.
Lincoln - Gropius House; the home of Bauhaus founder Walter Gropius.
Northampton - A building by Polshek, a mural by Tamayo, masterpieces by Rivera and Sheeler, and painted restrooms; it's all here at Smith College Museum of Art.
Springfield - Within the Museum of Fine Art is a remarkable painting by the 19th Century primitive artist Erastus Salisbury Field, The Historical Monument of the American Republic. This visionary masterpiece has been described as everything from a "patriotic wedding cake" to "the most grandiose vision of American history ever painted". Whatever, well worth a visit.
Wellesley - On the campus of Babson College, architect William Rawn's simple, spiritual cube: The Glavin Family Chapel.

Cornish - The Saint-Gaudens National Historic Site; the home and studio of Augustus Saint-Gaudens, America's best sculptor.
Exeter - One of Louis Kahn's best works: The Library at Phillips Exeter Academy. (Officially, the "Exeter Class of 1945 Library".)
Manchester - A Frank Lloyd Wright 1950 Usonian design, The Zimmerman House, is open for tours through the Currier Museum of Art.

Flemington - Take one model train layout, add vision, pump it full of steroids, and you got yourself Northlandz. Trust me, it's not your grandpa's model train basement.
Hamilton (near Trenton) - The Grounds for Sculpture
Lyndhurst - gabba gabba grave. Hillside Cemetery, the last resting place of one of the godfathers of punk rock, Joey Ramone.
Menlo Park - The Edison Memorial Tower, a recently restored art deco monument to old Tom.
Ridgewood - The preserved home and gardens of a pioneer in modernist landscape architecture: The James Rose Center for Landscape Architecture Research and Design.
Vineland - It's legendary, and it's being restored / rebuilt. Plan your vacation now to The Palace of Depression. (And if you have a few extra thousand lying around, it would sure help with the restoration.)

Beacon - Take one abandoned factory, throw in some big ol' minimalist art, and you got yourself The Dia Center for the Arts
south of Beacon - Yes, you've probably seen dozens of abandoned military surplus warehouses that look like huge 17th Century castles sitting in the middle of the Hudson River, but you've never seen one quite like Bannerman Castle.
Buffalo - A modern art mecca: The Albright-Knox Art Gallery. One of the world's best collections of 20th Century art.
Buffalo - The tall building artistically considered: Louis Sullivan's best skyscraper, the amazing Guaranty Building.
Buffalo - Beautifully restored, the Darwin D. Martin House; one of Frank Lloyd Wright's largest and most complex Prairie Style houses.
Buffalo - More architectural perfection from the Saarinens, Eliel & Eero: The Kleinhans Music Hall. Acoustical perfection, too - the Kleinhans is considered one of the world's finest venues to hear music. (additional web info here)
Corning - The Corning Museum of Glass, including a refined recent expansion by architect Thomas Phifer.
Croton-on-Hudson - As much a work of art as a feat of engineering, the Croton Dam is said to be the second largest hewn-stone structure in the world. (The first is the Great Pyramid of Giza.)
East Hampton - Pollock - Krasner House and Studio: where Jackson and Lee used to paint 'n' fight in blissful harmony.
near Garrison (north of Peekskill) - The home of one of the country's most influential modernist designers, The Russel Wright Center.
Lackawanna (suburb of Buffalo) - Our Lady of Victory Basilica; Why go to Rome when you can go to Lackawanna?
Moutainville - America's premier sculpture park, Storm King Art Center.
New Paulz - They don't make hotels like this anymore. Actually, they never made any other quite like this: Mohonk Mountain House. (And the Hotel's own website).


Oneida - Oh, to have been a free-lovin', veggie-eatin' 19th Century commie: The Oneida Community Mansion.
Remsenburg - My man Plum; the grave of P.G. Wodehouse. (Located behind the church on South Country Road at Basket Neck Lane.)
Saugerties - Opus 40; if Simon Rodia had worked with Isamu Noguchi they might have constructed something like this.
Syracuse - Art Deco in all its energetic glory: The Niagara Mohawk Building, built in 1932.

Altoona - Yeah, it's a railroad thing that attracts a bunch of Grandpas wearing train caps, but I say this feat of 19th Century engineering is pretty darn cool: The Horseshoe Curve.
Doylestown - Fonthill (The Mercer Mansion)
Elkins Park (suburban Philadelphia) - Frank Lloyd Wright's Beth Sholom Synagogue
Lanesboro - The Starrucca Viaduct; a landmark of American civil engineering,
near Ohiopyle - Of course you'll go to Fallingwater, but after your visit there continue on to Kentuck Knob, a beautiful Wright home from the 50's.
New Hope - The home and studio of modern master craftsman George Nakashima.
Paoli (near Philadelphia) - The home and studio of yet another modern master craftsman: The Wharton Esherick Museum. (Here's another Esherick page.)
Philadelphia - Spend a night at the Loews Hotel in the refurbished PSFS Building. (The world's first International Style skyscraper and a Philly icon.)
Philadelphia - Unfortunately many of the buildings designed by Frank Furness have been torn down through the years, but his masterpiece still remains: The Pennsylvania Academy of the Fine Arts.
Philadelphia - I sure miss the old, but really want to visit the new. The Barnes Foundation
Philadelphia - The historic department store is Macy's, but the Wanamaker Organ is still in the atrium and is now a National Historic Landmark.
Philadelphia - The Reading Terminal Market on a Saturday morning.
Philadelphia - Next trip to Philly, I'll be wallowing in my ancestor's misery: The Irish Memorial.
Philadelphia - If you worship Duchamp, then this is your pilgrimage: The Philadelphia Museum of Art.
Philadelphia - So if you don't care for Duchamp (and for all that he unleashed on the world of art), then go to the Museum of Art to see this tiny miracle of painting: Jan van Eyck's Saint Francis Receiving the Stigmata. Almost makes me want to start going back to church.
Philadelphia - All throughout Center City, the magnificent mosaic murals of Isaiah Zagar. Just walk along South Street, ya can't miss them.
Philadelphia - Termini. Brothers. Bakery,
Philadelphia - Another work of genius by Frank Furness, The Fisher Fine Arts Library, on the campus of the University of Pennsylvania. (And don't miss the Architectural Archives exhibit on the lower level of the Fisher.)
Philadelphia - Just a short walk from Independence Hall, stop in the lobby of the Curtis Publishing Building to check out Dream Garden, a stunning 15 x 49-foot mosaic that was a collaboration between artist Maxfield Parish and Louis Comfort Tiffany.
Philadelphia - So all you James Joyce freaks have already been to the collection at Buffalo/SUNY? Then head by a commodius vicus of recirculation to The Rosenbach Museum & Library to see their JJ manuscripts.
Philadelphia - A little-known gem, even though it's in the center of downtown, just next to City Hall: The Grand Lodge of Free and Accepted Masons of Pennsylvania.
Philadelphia - America's most historic empty prison that's not on an island in San Francisco Bay: Eastern State Penitentiary.
Pittsburgh - Skip the Vatican, go to Da Burgh. The beautiful & mesmerizing St. Anthony's Chapel is said to hold the second largest collection of religious relics outside of St. Peter's. (Here's the chapel's official website)
Pittsburgh - A secret treasure in a city of secret treasures; the murals of St. Nicholas Croatian Catholic Church by Maxo Vanka, "The Diego Rivera of America".
Pittsburgh - Resting for eternity in his native Pittsburgh, Andy can either be visited in person, or perhaps even better, on the 24/7 Warhol Cam !!

"I am Providence" - H.P. Lovecraft, Elder of Cthulhu.
Providence - Looking good these days after years of neglect. Don't miss the architecture of Providence.

Barre - tour the granite quarries of the Rock of Ages Corporation, and then see the company's showcase, Hope Cemetery.

Map of Additional
Travel Suggestions
for the Northeast 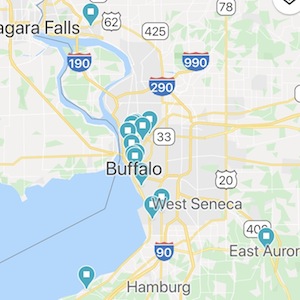 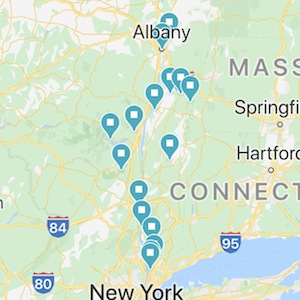 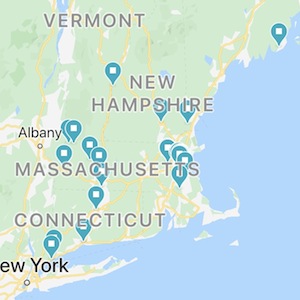 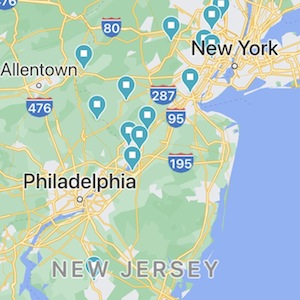 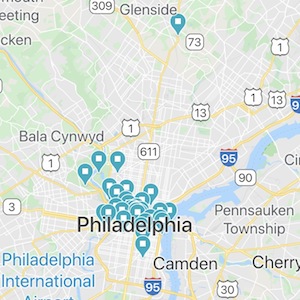 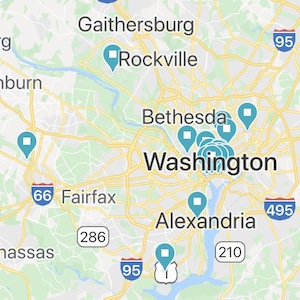