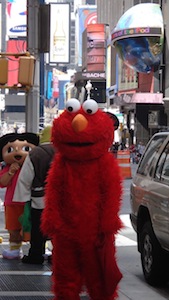 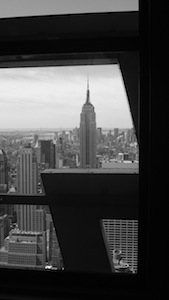 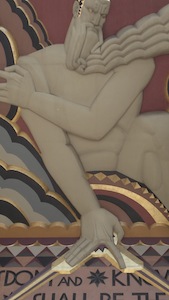 (NOTE: The listings have not been
updated in some time, but the
map below is current.)

"The true New Yorker secretly believes that
people living anywhere else have to be,
in some sense, kidding."

The Cloisters - Yes, you've heard it's world-famous, but have you ever been there? No? Then go! (And the next time I'm in town, I will).
Riverside Church


UPPER EAST SIDE / UPPER WEST SIDE

The Whitney Museum of American Art - Either monthly or biannually, don't forget the Whitney. And in a few years, return again to experience the new Downtown Whitney by architect Renzo Piano.
Rose Center for Earth and Space - What Howard Hawks was to the movies, James Polshek is to architecture. The critics have never considered him one of the great artistes, as they have no use for strength and clarity. With the Rose Center, Polshek finally started to receive some of the recognition he deserved.

Grand Central Terminal - (OK, so it's pretty darn famous, but I don't care, I'm including it anyway.) Really, it would be worth your money just to go here. Fly in, take a cab, head straight for Grand Central, go "WOWWWWWW!!", openly weep, ignore the crowds who are mocking your open weeping, get the number of the woman who admires your sensitivity to powerful architecture, go "WOWWWWWW!!" again, take the cab back to the airport, fly home. End of trip.
St. Bartholomew's Church - Bertram Goodhue's Byzantine wonder on Park Avenue.
The New York Public Library (The Humanities and Social Sciences Library)
The Top of the Rock - The roof observation deck of Rockefeller Center is now open to the public for the first time in years.
Paley Park - Midtown's tiny pocket of ivy-covered serenity
The Lobby of the Film Center Building
The Lobby of the Swiss Center Building
Central Synagogue - Following a devastating fire in 1998, this historic temple has been restored to its full grandeur.
The Sherman Monument - A gilded masterpiece by one of the greatest American artists of all time, Augustus Saint-Gaudens. (Located across from the Plaza Hotel at the entry to Central Park.)
The Seagram Building - I'll always have problems with the elevator carbuncle on the back side, but from the front, it's the crown of the city. Mies van der Rohe's bronze box has been copied thousands of times, but no one's done it better.
Lever House - After you've seen the Seagram Building, now visit its catty-cornered neighbor. SOM's and Gordon Bunshaft's modernist triumph has recently been renovated, and there are plans to finally build Isamu Noguchi's plaza garden design.
The Museum of Arts and Design (formerly The American Craft Museum) - Often overlooked, the museum continually produces excellent exhibits of the art of craft.
Under the 59th Street Bridge - More of a cathedral than the underside of a bridge, this Guastavino tile-covered space has been converted for use as a grocery and restaurant.
The Paley Center for Media (formerly the Museum of Television and Radio) - Not because of Philip Johnson's half-baked PoMo architecture, but because you can walk in off the street and within minutes view any episode of The Beverly Hillbillies.
Seinfeld Soup, the Huxtables' house, the 3-0-R-O-C-K FROM 30 Rock - you'll see 'em all here on On Location Tours

Scandinavia House - Home of the American-Scandinavian Foundation. Designed by an architect who always gets it right, James Polshek.
The Dia Center for the Arts
The Morgan Library - and it's new expansion by Renzo Piano.

The Bayard-Condict Building - the only New York work by the father of modern architecture, Louis Sullivan. Bring your binoculars for a good look at the angels at top.
The Singer Building (The "Little" Singer Building) - If the Hallidie Building in San Francisco is the grandfather of the glass curtain wall skyscraper, then this is the great-grandfather. A graceful combination of terra-cotta, glass, and (wrought, not cast) iron.
New School University (The New School for Social Research) - The main administration building contains two must-sees: Joseph Urban's modernist Tishman Auditorium, and the murals of Jose Clemente Orozco.
The Earth Room by Walter De Maria - "It's a room full of dirt!!" Yes, yes it is. And it is art.
The Broken Kilometer by Walter De Maria - "It's 500 two-meter-long solid brass rods sitting on the floor!!" Yep. It's also art. You gotta problem with that??
The Jefferson Market Regional Library (Jefferson Market Courthouse) - A High Victorian Gothic masterpiece. Even the most Miesian of modernists will be in awe. Or at least I'd like to think. "Old Jeff" is also one of the earliest success stories in the New York preservation movement. (With Penn Station and the Old Singer Building the tragedies.)
Joey Ramone Place (the corner of Bowery and Second Street) - Yes, it's official, the godfather of punk is now honored for eternity. (Or until I steal the sign.)

The Lobby of One Wall Street (Irving Trust Building) - The security guards may kick you out as soon as you step through the doors, but this room is a gem. (On the weblink photo, it's the lobby with black, orange, and gold mosaic walls and ceiling. Is that cool or what?)
The Woolworth Building - Cass Gilbert's "Cathedral of Commerce" was the tallest in the world from 1913 to 1933, when it was surpassed by the Chrysler Building. (Alas, the stunning lobby has been closed to the public since 9/11.)
The Irish Hunger Memorial - Dedicated in the Summer of 2002, this sublime memorial to the Great Famine of 1845-52 consists of a sloped raised landscape that recreates a barren potato field and abandoned stone cottage.
The Skyscraper Museum - Located in the ground floor of the Ritz-Calrton Hotel in Battery Place.

Under the Stillwell Avenue Elevated Rail Line - The chase route from "The French Connection". (Keep your speed under 85 and avoid moms with strollers.)
The Brooklyn Museum - A permanent exhibit, artist Judy Chicago's iconic The Dinner Party.
The Willie (Williamsburgh Savings Bank Building) - Not all great Art Deco towers are on Manhattan. (more good pics here)
"The best in men's clothing, call Paul's Boutique. Ask for Janice."

The Panorama of the City of New York - Built for the 1964 World's Fair, and currently housed in the Queens Museum of Art, this amazing 9,300 square foot scale model of all five boroughs of the city is, well, amazing.
The Isamu Noguchi Garden Museum
P.S. 1 Contemporary Arts Center

...far beneath the surface of the Isle of Staten; the 36th Chamber of the Wu-Tang 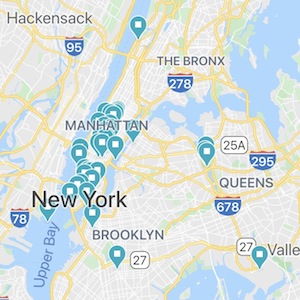