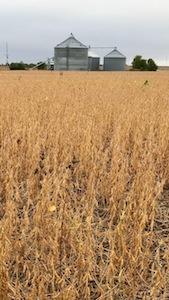 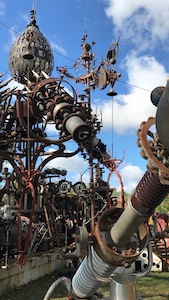 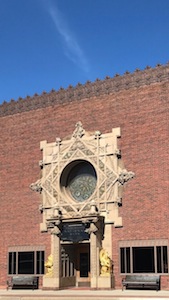 Travel Guide
& NarrowMaps
of the Midwest 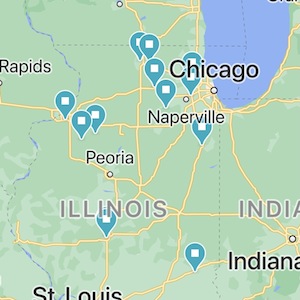 Columbus - A small town packed with great (or at least darn good) modern architecture. Two of the best churches of the 20th Century are here: Eliel Saarinen's First Christian and Eero Saarinen's North Christian.
Columbus - Eero Saarinen's finest (and one of his few) works of domestic architecture; The Miller House, now owned by the Indianapolis Museum of Art.
Goshen - Anyone else out there who believes that Howard Hawks was one of our greatest film directors? Then let's make a pilgrimage to the site of his birthplace and pay tribute.
Indianapolis - It's ancient and it's accepted: it's the Ancient Accepted Scottish Rite Cathedral.
New Harmony - The Atheneum; among the better buildings by contemporary architect Richard Meier. (But don't go expecting to see a pristine white jewel; it's been left out in the rain and hasn't aged too well. That seems to have happened with a lot of his work.)
West Baden Springs - The West Baden Springs Hotel 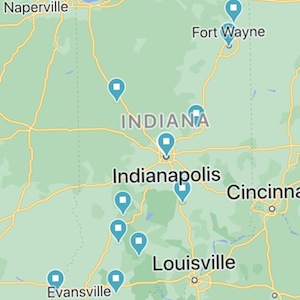 Davenport - The Figge Art Museum, designed by British architect David Chipperfield.
Des Moines - The Des Monies Art Center; composed of three interconnected buildings by Eliel Saarinen, I. M. Pei, and Richard Meier.
Des Moines - Within the collection of the Iowa State Historical Museum, the mind-blowing "sand art" bottles of Andrew Clemens.
Dubuque - A gem on the bluffs of the Mississippi, Eagle Point Park is probably the finest example of Prairie School landscape architecture in the U.S. (Information on its remarkable creator, Alfred Caldwell).
Grinnell - The Merchants' Bank; one of Louis Sullivan's best "jewel box" banks built in the Midwest in the 1900's and 1910's.
Iowa City - Jackson Pollock's waycoolbigass 1943 painting, "Mural", at the University of Iowa Museum of Art.
Quasqueton - A fine Frank Lloyd Wright Usonian house from 1950; The Walter Residence (aka "Cedar Rock") is an Iowa state park and is open for tours.
Sioux City - The Woodbury County Courthouse; the largest Prairie School style building in the nation.
Spillville - Bily Clocks Museum; a collection of amazing ornate wood clocks handmade by brothers Joseph and Frank Bily during the 1910's and 20's.
West Bend - Perhaps a bit on steroids and out of control, The Grotto of the Redemption is still one of the most incredible places you'll ever visit. Spend the night at the lil' motel in town and see the Grotto at night. 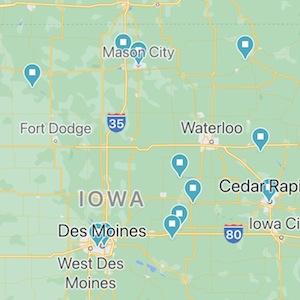 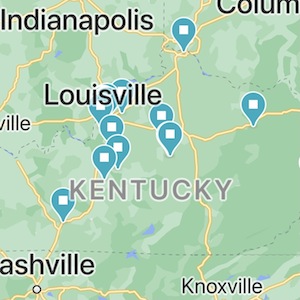 Bloomfield Hills - The campus of Cranbrook School
Bloomfield Hills - The Saarinen House; the restored home of Finnish-American master architect Eliel Saarinen.
Charlevoix - It's a neigborhood of Hobbits: the The "Gnome Houses" of developer Earl Young. (the link is to a selection of articles on the houses)
"Detroit, lift up your weary head!" - Sufjan Stevens
Detroit - The Detroit Industry Murals of Diego Rivera at the Detroit Institute of Arts. Once again, one of the world's masterpieces of art is in our own back yard.
Detroit - If you love folk art and if you love signage, Detroit has both. Check out author David Clements' book Talking Shops.
Detroit (Redford) - And if you love folk art and pizza, Silvio Barile has both: Silvio's Italian-American Museum (and Pizzaria). (NOTE: Following the death of Sivio in 2019, not sure of current status.)
Detroit - It's been called Detroit's largest art object: The Fisher Building, a Deco masterpiece by Albert Kahn.
Detroit - And just as awe-inspiring as the Fisher, The Guardian Building. Step inside to view the Pewabic Pottery tile-decorated interiors.
Detroit - And speaking of Pewabic Pottery, don't miss visiting the historic studio and school.
Detroit - The Fox Theater (see Atlanta & St. Louis for more Foxes)
Grand Rapids - Frank Lloyd Wright's Meyer May House.
Mackinaw City - The Mackinac Bridge
Midland - The Alden B. Dow Home and Studio; a beautiful and complex work by Alden Dow, student of Frank Lloyd Wright. 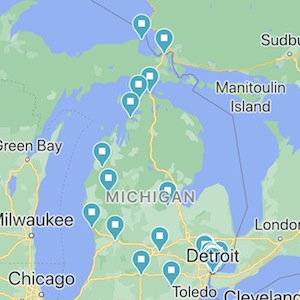 Collegeville - Marcel Breuer's St. John's Abbey Church; from back in the days when architects weren't afraid to be bold & powerful.
Grand Marais - The way-way over-the-top Art Deco of The Naniboujou Lodge.
Hibbing - Just because it's the home town of Bob D.
Minneapolis - The Foshay Tower
Minneapolis - Just trust me, go visit a mausoleum on your next vacation. Architect Joan Soranno's Garden Mausoleum at Lakewood Cemetery is a building to die for. And don't miss the Byzantine-style mosaic jewel just a few yards east - the historic 1910 Lakewood Memorial Chapel.
Owatonna - Architect Louis Sullivan's National Farmers' Bank; the largest and most refined of his "jewel box" banks.
St. Paul - The Cathedral of Saint Paul 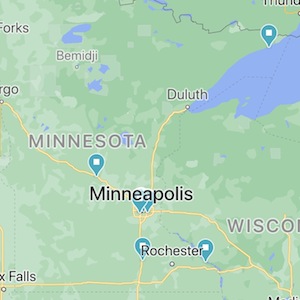 Kansas City - The American Jazz Museum
Kansas City - The Arabia Steamboat Museum; displaying the intact cargo of a Missouri River steamboat sunk in 1856 and excavated from a Kansas cornfield in 1989.
Kansas City - The National World War I Museum at Liberty Memorial
Kansas City - The 2007 expansion of the Nelson-Atkins Museum of Art by architect Steven Holl. (NOTE: My review upon visiting in Spring 2009; At night, looks great. Daytime, not so much. The original builiding? Great both day and night.)
Kansas City - If you insist on spending your vacation at a shopping center, at least go to a good one: historic Country Club Plaza.
Kirkwood (suburban St. Louis) - The Kraus House, a Frank Lloyd Wright Usonian that is now open to the public.
St. Louis - The Cathedral Basilica of St. Louis; if you can't make it to Europe this year to visit a great cathedral, head to Missouri.
St. Louis - The City Museum. Children's museums aren't supposed to be cool & edgy, this one is. Kiddies, bring you parents.
St. Louis - The Fox Theater (see Atlanta & Detroit for more Foxes)
St. Louis - Architect Tadao Ando's simple gem: the Pulitzer Arts Foundation. 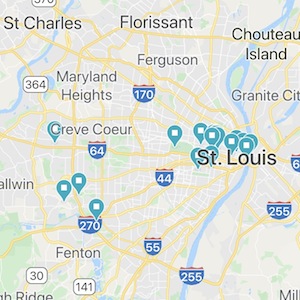 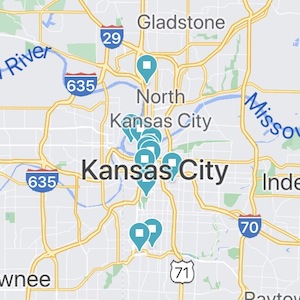 Akron - Where to find the hot spot for avant-garde 21st Century architecture in the U.S.?? Not SoCal, not Manhattan, but...Ohio! Pack your bags for a visit to Austrian architects Coop Himmleb(l)au's addition to The Akron Art Museum. (That being said, the addition appears to be just a tad overwrought. I'll just have to check it out in person.)
Cincinnati - The Empire State Building relocated to the Midwest: Carew Tower.
Cincinnati - After you've visited Carew Tower, walk next door and treat yourself to an evening stay at the finest Art Deco hotel in America: The Hilton Netherland Plaza.
Cincinnati - And after you've stayed at America's finest Art Deco hotel, go see it's finest Art Deco train station: Union Terminal. (Now the home of the Cincinnati Museum Center)
Cincinnati - The Contemporary Arts Center by the late Zaha Hadid. (RIP, Dame Zaha.) For years I was never the biggest fan of her work, but after visiting the CAC I realized she was a genius.
Cincinnati - Plum Street Temple (Wise Temple); an incredible "Moorish style" synagogue dating from 1865. Considered to be the birthplace of American Reform Judaism.
Cincinnati - Spring Grove, one of the world's best landscaped cemeteries.
Cincinnati - Frank Gehry's Vontz Center for Molecular Studies; a post-Bilbao brick blob that I must admit I liked.
Cincinnati - The Underground Railroad Freedom Center.
Columbus - Architect Peter Eisenman's Wexner Center for the Arts at Ohio State University. Despite the fact that Dr. Eisenman is an egocentric boob, I thought it was... perhaps... actually... kinda... interesting when I visited in 1993. (Of course I wasn't worried about displaying art or maintainting a leaky roof.)
Dover - Not a tourist stop on the highway, it's a destination: The Warther Carvings Museum. You're probably thinking, "hmmm....a collection of carved ebony and ivory locomotives...I dunno." I think it's art.
Newark - One of the few giant basket-shaped corporate headquarter buildings in central Ohio: Longaberger Basket Co.
Newark - Plan a pilgrimage: Louis Sullivan's long-neglected Home Building Association building is now undergoing a complete restoration.
Sidney - The People's Savings and Loan Association Bank; among the best of Louis Sullivan's ornate "jewel box" banks.
Springfield - One of my favorite (and vastly underrated) art environments, the restored The Hartman Rock Garden.
Springfield - Frank Lloyd Wright's Westcott House has been restored and is open to the public.
Toledo - Designed by the Japanese architecture firm SANAA, the all-glass The Glass Pavilion at the Toledo Museum of Art, houses the museum's world-renowned collection of art glass. (I want to go to see the wafer-thin roof.)
Wapakoneta - Ain't nothing like it anywhere, I just wish there was one on every street, in every nation; Jim Bowsher's Temple of Tolerance. 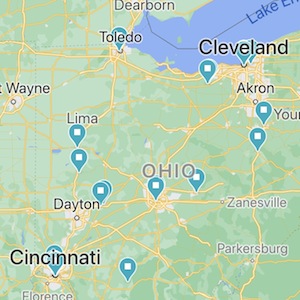 near Fayetteville - New River Gorge Bridge; one of the world's longest single arch steel spans and the 2nd highest in the U.S. (If you can schedule it, visit on Bridge Day.) You can now walk the entire catwalk UNDER the bridge: Bridge Walk. Sounds kinda pricey, and a number of rules to follow, but I'd do it if I ever return.
near Moundsville - Jai Guru Deva, Ommmmmm: It's the country's largest Hare Krishna temple, The Palace of Gold.
Weston - A remarkable showcase of the art of metalsmithing and the genius of Samuel Yellin; the Citizens Bank of Weston.

near Baraboo - Dr. Evermor's The Forevertron - it might be the world's largest sculpture, perhaps an anti-gravitation machine ... just go see it.
Columbus - Louis Sullivan's Farmers and Merchants Union Bank
Dickeyville - The Holy Ghost Grotto
La Crosse - Mary of the Angels Chapel
Lake Delton - Make your reservations now to spend the night in a Frank Lloyd Wright vacation cabin, the Seth Peterson Cottage. (Once-a-month Sunday tours are available.)
Milwaukee - The Milwaukee Art Museum; the first work in the U.S. by Spanish (over-budget) architect/engineer Santiago Calatrava. (And does it really need those absurd wing things? Of course not, that's just Calatrava showing off again. Hey, ya gotta have something that looks good on the magazine covers.)
Phillips - Fred Smith's Concrete Park
Racine - Frank Lloyd Wright's corporate cathedral, the 1936 SC Johnson Wax Headquarters is undoubtedly a must, must, see.
Rudolph - The Rudolph Grotto
Sheboygan - Sublime, visionary, and it's got America's coolest washrooms: The John Michael Kohler Arts Center. (Here's the washrooms.)
Spring Green - Frank's finest: Taliesin. (Along with Lou Kahn's Kimbell Art Museum, this is my favorite work of American Architecture.)
Williams Bay - The birthplace of modern astrophysics: Yerkes Observatory. NOTE: The historic observatory closed in 2018, but there are proposals to reopen in the future for educational programs. 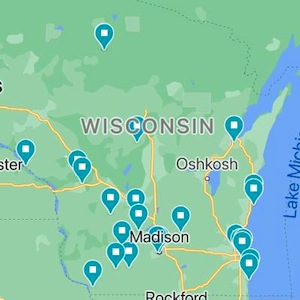